On the eve of the Honolulu City Council zoning committee hearing in which the committee will vote on chairman Ikaika Anderson’s amendments to Bill 47, community groups Aloha Aina No Koolau Loa and Defend Oahu Coalition, along with Koolau Loa community members from all of the different towns in the region, held a press conference in support of the amendments outside Honolulu Hale.

Anderson’s amendments would remove current language in Bill 47—the Koolau Loa Sustainable Communities Plan (KLSCP)—that allows for the urban growth boundary to be moved to include the Malaekahana area, which is currently zoned for Ag-use. This would prevent developer Hawaii Reserves Inc. (HRI) from building a proposed new town between Laie and Kahuku.

“Behind me are representatives from each of the communities in Koolau Loa and across Oahu; they have all taken a position against development in Malaekahana,” said Joshua Noga of Aloha Aina No Koolau Loa. “We are committed to the preservation of Koolau Loa’s unique country character from the dangerous effects of massive urbanization, the threat of gentrification and the displacement of our people. Our rural community wants to remain a rural community; our community wants our Ag-zoned land to remain Ag-zoned land, dedicated to increasing the food production of our island.”

“This is a fight for our future; the question for our council is, ‘who will decide that future?’” said Tim Vanderveer, co-chair of the Defend Oahu Coalition. “Will it be special interests and corporations? Or will it be our friends and our neighbors, and those we elect to public office? We want to leave more for our keiki than concrete. We want to keep the country, country.” 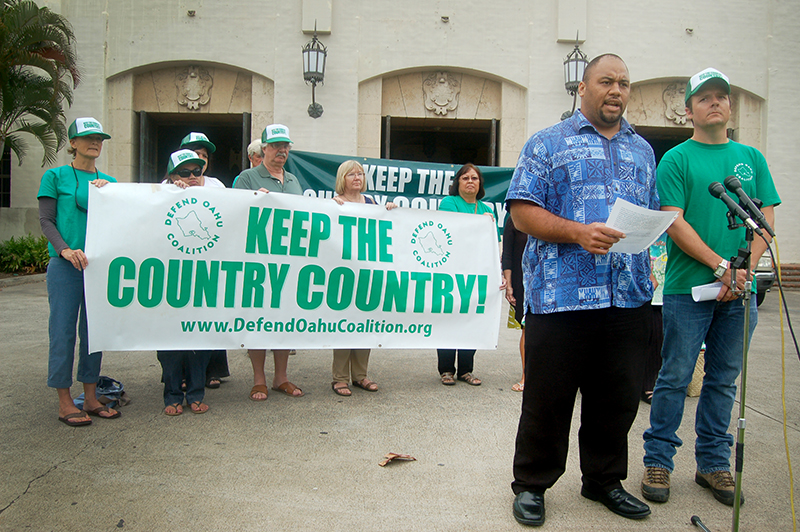 The biggest contention made by HRI (a for-profit wing of the Church of Latter Day Saints) is that Koolau Loa, like the rest of Oahu, is in a housing crises and new families and young professionals are in desperate need of truly affordable rentals. HRI claims that its Envision Laie project is necessary to alleviate that crisis and to provide additional jobs for residents in Koolau Loa.

“We agree that multiple generations living under roof is a crisis. But this is a manufactured crisis,” said Vanderveer. “The development interests in Laie promised, over 25 years ago, to provide homes for their community, within the existing urban boundary, and they have failed to do so.”

“HRI has all of the permits necessary to go ahead and start building the affordable low- to mid-rise housing that they can within the existing boundary of Laie,” said Noga. “They don’t need to push the boundary into rural Ag land to provide housing. That’s a myth that they created. But President and CEO Eric Beaver has come out and said, boldly, that they don’t want to build in that space because it would hem them in from any further development.”

“They want you and I to support the re-zoning of the agricultural lands they already have so that they can build a massive urbanization—essentially turning Malaekahana into a Mililani,” continued Noga. 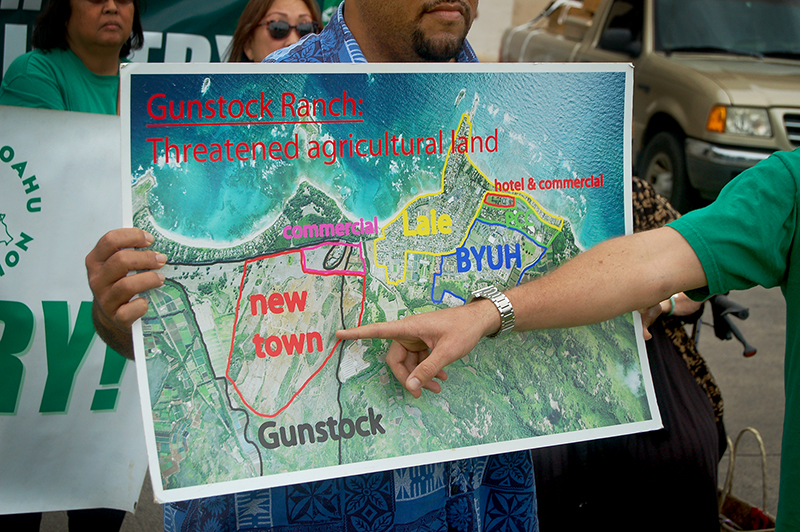 Of course, HRI is proposing to build a lot more than just 875 new homes (only about half of which would actually be considered “affordable”) in the state Ag-zoned Malaekahana. They also want to build a strip-mall, a light-industrial park, a new school and all the associated infrastructure that goes with it, including a second highway branch mauka of Laie that would cut straight through kuleana land holdings, displacing families that have lived in Laie for generations upon generations.

In perspective, the existing towns of Laie and Kahuku would each be smaller than what is being proposed at Malaekahana. The project could potentially triple the population living between Kawela Bay and Kaaawa.

“The added traffic and stress on the infrastructure of a two-laned, 100-year-old highway will be immense,” added Kaye Walsh, a Kaaawa resident. “In Kaaawa, the road is literally collapsing into the sea in three places—less than two hundred yards from my house!”

When previous Department of Planning and Permitting (DPP) director David Tanouye was asked how the city planned to handle the massive increase in traffic this project would create, he nonchalantly replied that the city would simply widen the highway. Of course, that would mean evicting many of the people that currently live along the highway, not to mention the fact that the highway is a state road and the state has expressed no interest in such a project.

“I have concerns because the infrastructure is already over-taxed to the point that, for those of us that already live in rural areas, the police can’t find us, the fire department can’t find us, emergency medical services can’t find us—we have no trauma center; Kahuku Hospital is basically a clinic,” said Laura Gray, a registered nurse and Koolau Loa resident. “There’s no sewage treatment facility up there either; everyone uses septic. Can you imagine what will happen when it rains and all the waste from that new town hits the ocean?”

“Especially in a place like Kaaawa where the road is so close to the ocean, there are real concerns about inundation zones and evacuation in the event of a tsunami,” said Vanderveer.

Turtle Bay was built to the proper height for a Tsunami zone, but there’s really no other place for people to shelter in Koolau Loa, and with such a huge increase in the number of people who might have to evacuate the area in the event of a large-scale Tsunami, an already big disaster might become a catastrophic one. 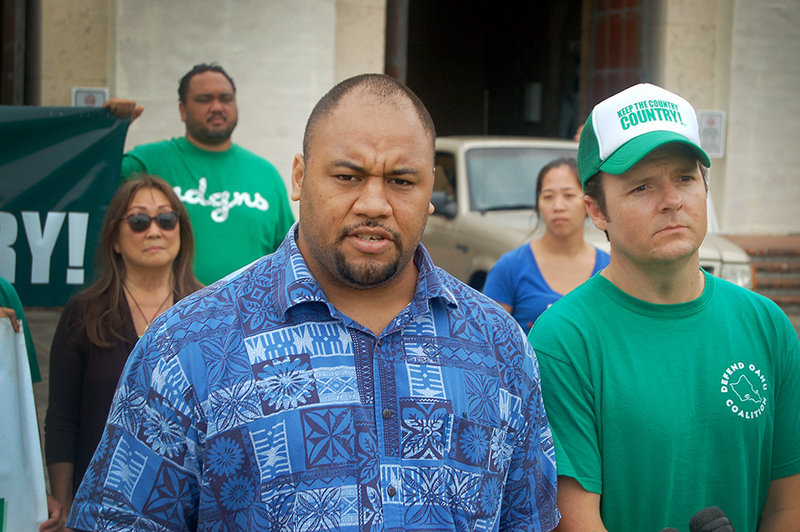 Vanderveer said they also want the council to change the language concerning Turtle Bay which, under the current KLSCP, would be allowed to build up to five hotels and 1,000 condominiums, despite the conservation easement agreement reached with the state last year that prevents further development in that area.

“What we really want the council to do is to not only adopt the amendments proposed by chair Anderson, but to also take a look at the 2009 Plan Advisory Committee recommendations,” added Noga.

The 26-member advisory committee was comprised of a wide range of community members, from Native Hawaiian cultural practitioners to the developer HRI and, therefore, is an accurate representation of the community’s wishes.

“Beaver was a part of the PAC, but what came out of that committee was a compromise,” said Noga. “We would allow the affordable housing to be built, but keep it within the existing boundaries of Laie.”

“DPP met with development interests after that PAC report and changed the plan to reflect what those developers wanted to see in Koolau Loa,” said Vanderveer when asked how the KLSCP had changed so dramatically between 2009–10. “With the PAC, the community spoke and their decision was that we should not extend the urban boundary or to allow five hotels at Turtle Bay.

“We’re hopeful that council chair Ernie Martin will do what he did for the North Shore Sustainable Communities Plan, which was to undo changes made by DPP and restore the version that came out of the community,” continued Vanderveer.

Of course, even if Anderson’s amendments do pass and development in Malaekahana is prevented, HRI might appeal to the Land Use Commission to get the land re-zoned at the state level.

“I do not expect this to stop them at all,” said Vanderveer about HRI. “This is a battle that’s been going on now for almost a decade, and I don’t believe that this will be the last we’ve heard from HRI.”

The LDS church plans to build the largest Koolauloa development in Laie.