Please note that a clarification on the voting protocol has been added at the end of the article.

HONOLULU—The State Land Use Commission’s (LUC) decision to allow a light industrial park to be built on Lualualei valley farmland has been rescheduled for April 20 or 21 due to voting constraints.

Only six of the nine commissioners were present for the Friday, April 8 meeting at the Leiopapa a Kamehameha State office tower in downtown Honolulu. Two commissioners, Charles Jencks and Ronald Heller, voted to deny the petition that would amend the 96-acre parcel’s current agricultural designation to an urban one. But the following four commissioners denied the motion: Chairman Vladimir Devens, Duane Kanuha, Nicholas Teves, and Kyle Chock.

Because a six-vote super majority is required to approve or deny the boundary amendment, the split vote did not carry any decision making force.

“Hopefully the other commissioners will be present so that we get a definitive decision one way or the other,” Devens said.

The LUC’s pending decision comes after months of public testimony given both for and against the project, which the developer claims would provide affordable business space for the community. And although a great deal of attention had been paid to arguments touting or refuting the cultural and agricultural significance of the site, for commissioners Jencks and Heller it came down to the logistics.

Jencks cited unresolved access and maintenance concerns as his reason to reject the amendment. There is currently only one viable road up to the property—the military-controlled Lualualualei Naval Access Road. To date, the developer has not reached an easement agreement with the Navy. Needed upgrades and maintenance costs for the road are also still in limbo.

“It seems to be that this Commission shouldn’t be in the business of awarding boundary amendment to properties that have these kinds of issues associated with them that can’t be clarified, can’t be straightened out,” Jencks said.

“I’m not necessarily saying that this petition should be denied forever,” Heller said. “I think the petitioner should get access to the road established before they come to us to make this decision.”

None of the other commissioners commented on their positions.

Of those that gave their final testimonies last week was the State Office of Planning (OP), which did not object to the boundary amendment but proposed that the LUC impose a five-year deadline for obtaining the easement and also recommended that the road access be effective for at least 30 years. If no agreement is made by then, Tropic Land LLC would have to approach the Commission for review. The State agency also advocated that the industrial park be built to meet Leadership in Energy and Environmental Design (LEED) standards in order to satisfy State laws on conserving natural resources.

Representing Tropic Land, attorney William Yuen stated that the developer agrees to the five-year timeframe for both acquiring the long term easement as well as for obtaining approval in the City and County’s Waianae Sustainable Communities Plan (SCP), which is currently in the renewal process. But the LEED certification requirement, which, according to Tropic Land, would increase construction costs by 10 to 15 percent, was rejected on the grounds that only one warehouse in the state meets such requirements.

Yuen also noted that the LUC has a history of rejecting LEED certifications as conditions for approving amendment changes.

“There should be no further urbanization of these agricultural lands.”

Speaking on behalf of the group the Concerned Elders of Waianae, which is against the development, KAHEA attorney Marti Townsend gave her closing testimony. Highlighting arguments made at previous hearings, she emphasized both the parcel’s past agricultural productivity (challenging the developer’s assertion that the land isn’t conducive to farming) and the cultural significance of the area in the Maui and Hina legends. She also contended that, according to the Elders, allowing this “spot zoning”—or urban development in an otherwise agricultural district—would justify allowing the neighboring parcels to become landfills in the future.

“We should draw a line in the sand now,“ Townsend said, “and say there should be no further urbanization of these agricultural lands.”

Others also gave their final testimonies. Representatives from the Waianae Rotary Club, the Waianae Business Center, and the Nanakuli Neighborhood board, among others, voice their support for the project.

“The project would provide much needed employment opportunities for the residents of our neighborhood,” said Neighborhood Board Chair Patty Teruya.

“There needs to be some kind of economic development generated in the community so that these children can feel like they’re something they have to look forward to,” said James Kelii, who is also a member of the board and is an educator. He also noted that, as a Hawaiian whose family has resided on the Waianae Coast for several generations, he believes there is no danger of harming cultural sites.

Those who are opposed see things differently.

“In my mind I see urbanization of that whole area, not only that place,” said Airleen Lucero of the Nanakuli Homestead Association. She had originally supported the development but changed her mind. “Where are the laws that protect our sacred ‘Aina, our sacred sky, our sacred water from investors who love only money?”

Another resident, Polly Grace, also originally advocated for the project but has since withdrew her support because she heard stories of the ali‘i that used to travel near the area. She also senses spiritual activity there.

“It’s not the capital dollars but the cultural Hawaiian respect that we need to pass on for generations and generations,” Grace said. “These our not taught in school. You must teach your family. And I’m glad I taught my family that because they brought it back to me.”

Update on 4/15/2011: The LUC must vote to approve of the boundary amendment by at least a six to three margin. Failure to pass a vote to deny the amendment does not grant approval.

Note that there is a City and County Planning Commission meeting regarding the Waianae Sustainable Communities Plan from 1:30 p.m. to 6:00 p.m. on Wednesday, April 20 at Kapolei Hale. Those who haven’t yet testified either for or against the proposed light industrial park’s inclusion in the plan will be allowed to do so, but please remember that 15 copies of your testimony will need to be filed with the commission 48 hours before the meeting. 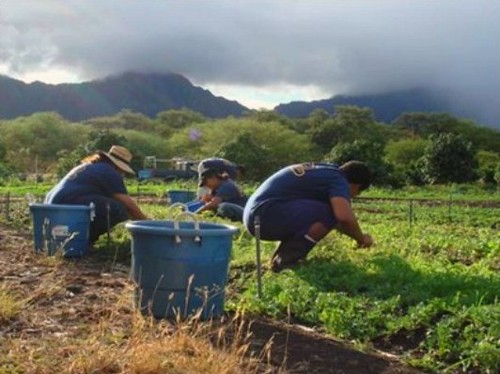 Lualualei community fights to save farmland