MANOA—University of Hawaiii researchers are going door-to-door to ask women from the islands to participate in a study designed find answers to childhood problems such as asthma, autism, obesity, and diabetes. The National Children’s Study is the largest long-term study of children’s health ever conducted in the United States. The UH Manoa Study Center at the John A. Burns School of Medicine is one of only 37 study centers around the country selected to begin the initial phases of research.

“Over the next 21 years, the study will give us greater insight into disorders of birth and infancy, as well as adult disorders that are believed to be influenced by early life exposures and events,” said Dr. Lynnae Sauvage, principal investigator with the National Children’s Study and UH professor of Obstetrics, Gynecology, and Women’s Health. “This study will be one of the richest research efforts to focus on children’s health and development. What we learn will be used to improve the well-being of children in Hawaii and the nation for generations to come.”

The study is national in scope, but is taking a “hyperlocal” approach to recruit participants who can have a major impact on the health of future generations.  Postcards have been sent to households in 12 randomly selected neighborhoods to raise public awareness of the research. Recruitment of women who are or may become pregnant is scheduled to begin in late November.

The 12 neighborhoods are Ewa, Kaimuki, Kailua, Kalihi, Makiki, Mililani, Salt Lake, Schofield Barracks, Waianae, Waipahu, Hauula, and the Airport area. Together, these locations were chosen to contribute to a representative sampling of the geographic and demographic diversity of the United States as a whole. 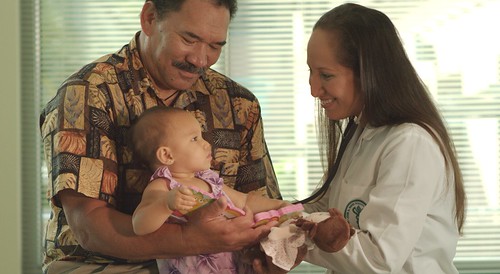 In Hawaii, field researchers will be continue going door-to-door encouraging women who are or may become pregnant to participate. Health care providers will also refer potential participants to the study.

The study will examine the effects of environmental influences—such as air, water, and diet—on the health and development of 100,000 children across the nation, following them from birth until age 21. Researchers expect to analyze the information yielded by the study to gain a better understanding of the complex interplay of genetics with environmental factors: the foods our children eat and the places they live, learn, and play.