HALEIWA—The North Shore’s popular Ke Ala Pupukea Bike-path is busy daily accommodating people riding bikes, skateboarding, pushing strollers, and jogging. The path stretches from Three Tables to Sunset Beach. In recent months, a section of the path at Sunset Beach has deteriorated due to sand loss beneath the bike path, resulting in pavement erosion. After becoming a community concern for North Shore residents, the Vans Triple Crown of Surfing donated $8,000 to replace the lost sand and re-pave the unsafe part of the bike path at the popular surf break.

The bike path erosion is a result of the North Shore’s high surf washing away the sand that acts as a foundation to the path, as well as beach goers stepping off of the bike path and pushing the sand away. At recent Sunset Beach Community Association and North Shore Neighborhood Board meetings, community members noted that with the start of the new surf season, increasingly larger crowds will be drawn to the North Shore. Testifiers also added that the bike path provides a “green” alternative to commuting. Reed Matsuura, a representative for Councilmember Donovan Dela Cruz, said Dela Cruz’s office received an extremely high amount of calls regarding the condition of the path, which Matsuura said serves “thousands of people.”

In response to community requests, Dela Cruz’s office sent a Request for Investigation and Service Report to the City administration asking that action be taken on repairing the path. However, the Department of Parks and Recreation responded by stating that they do not currently have the funds necessary to repair the busy path.

Randy Rarick, the executive director for the Vans Triple Crown of Surfing (VTCS), contacted Dela Cruz’s office offering to help the bike path get repaired, according to Matsuura. The VTCS, which hosts three large professional surf competitions at Sunset Beach, Pipeline, and Alii Beach Park each winter and draws a large influx of visitors to the North Shore, made an $8,000 donation to assist the City in what Matsuura called a “temporary fix” for the bike path.

“The timing is tough with the surf season just starting,” Matsuura said on Friday. “A new portion is being funded by Randy Rarick and the Triple Crown, but it’s a temporary fix for now. It’s going to need more work, but right now the sand is being replaced. It’s being pushed back up to the path and the pavement is being replaced too.”

Matsuura said the much-needed construction on the bike path began in September, and is expected to be finished later this month. Dela Cruz’s representative did now know when permanent repairs would be made to the approximately three-mile long bike path.

“What we would like to see in the long run for a permanent fix is to have big sandbags placed on the water side of the trail to prevent sand erosion in the future,” Matsuura explained. “It will need this because what is happening is that people who cross over the bike path step down and push the sand away, and this is a lot of people. With big sand bags even the surf wouldn’t pull the sand away.”

The busy area at Sunset Beach where the eroded section of the bike path is located is also home to a busy parking area bordering a section of Kamehameha Highway that is often subject to bumper to bumper traffic, as passersby stop to view surfing. North Shore residents have expressed frustration with the traffic on the highway as well as the cluttered parking lot, both a result of visitors viewing the famous surf break.

“Unfortunately, there are not enough funds to build it right now,” said Matsuura. 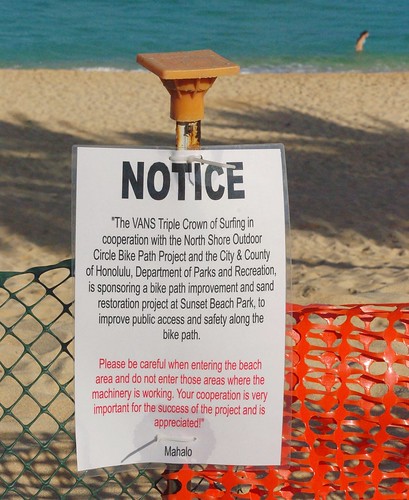 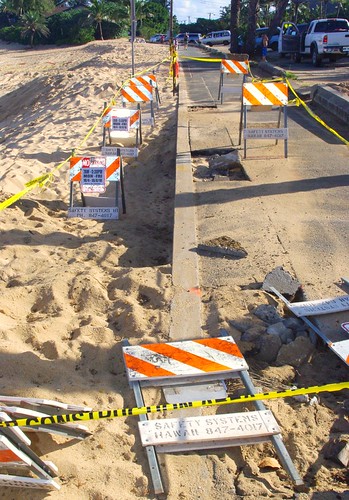