The following story is the first of a three-part series examining the impact of APEC on Hawaii and the Pacific region. The author, Arnie Saiki, is a researcher and the project director for Statehood Hawaii/ImiPono Projects, an independent and nonprofit website promoting open public dialogue on the issue of Hawaii’s statehood.

By itself, it’s not unusual for policymakers to over-reach and make grandiose statements like: “One of the most important tasks of American statecraft over the next decade will therefore be to lock in a substantially increased investment—diplomatic, economic, strategic, and otherwise—in the Asia-Pacific region.”

However, there are seismic changes in the Pacific region that are coming to a beachhead, and it is in Hawaii at the Asia-Pacific Economic Cooperation (APEC) forum, that many of these changes will likely be advanced. Some of the changes that are being promoted include: the Trans-Pacific Partnership Agreement (TPPA); regional resource acquisition and depletion; a more formalized containment of China; and an increase in international investment in Pacific Island Nations through an expanded relationship between the United States and the Pacific Islands Forum.

In “America’s Pacific Century,” Clinton writes: “We are also making progress on the Trans-Pacific Partnership, which will bring together economies from across the Pacific—developed and developing alike—into a single trading community. Our goal is to create not just more growth, but better growth ... our hope is that a TPPA with high standards can serve as a benchmark for future agreements—and grow to serve as a platform for broader regional interaction and eventually a free trade area of the Asia-Pacific.”

The TPPA is currently under negotiation and will be a central focus of this November’s APEC meeting in Honolulu. If concluded, it will be the largest Free Trade Agreement, setting the pathway for an even larger Free Trade Area of the Asia Pacific (FTAAP). 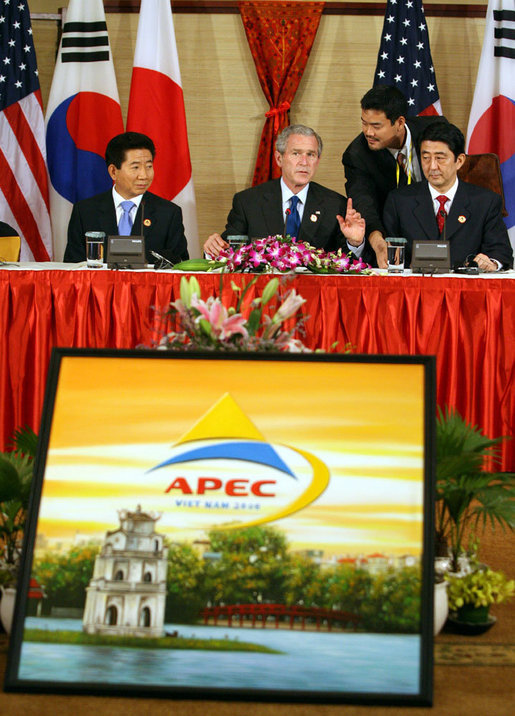 Although campaigning on a platform for trade reform, President Barack Obama has already pushed through three Bush-era Free Trade Agreements with Korea, Columbia, and Panama. And as Lori Wallach, from Public Citizen points out, a majority of Democrats voted against Obama because the deals were a trio of “NAFTA-style job-killing trade agreements.”

APEC may set the grounds for another.

After years of delay, Japan has expressed joining the TPPA negotiations—a decision that both the United States and China were awaiting, but for opposite reasons. Japan’s decision is likely to have rippling consequences throughout the region, potentially adding fuel to growing concern over resources and manufacturing, leaving some to speculate that this competition for regional economic hegemony throughout the Asia-Pacific between the United States and China will launch a “Cold-War II.”

As a long-time strategic partner, the United States has been pushing Japan to participate in this unpopular trade agreement despite massive protests by farmers and students. China has not formally given a position on the TPPA as it has been waiting to see what Japan will do. If Japan backs away from joining the TPPA talks, it is likely that China would not protest too loudly over its regional isolation. But because Japan has stated that they will join talks at the APEC Leader’s Meeting this November, we will have to wait to see what China does.

This is likely a quagmire that Japan had wanted to avoid. With the passing of the new KOR-US Free Trade Agreement, the largest Free Trade agreement since the North American Free Trade Agreement (NAFTA) in 1994, Japan’s business community is rallying Japan Prime Minister Yoshihiko Noda to join negotiations. In addition to pressure from the United States, Japan is being given little choice but to join the TPPA negotiations fearing new Korean advantages over auto exports to America.

[Some speculate that] competition for regional economic hegemony throughout the Asia-Pacific between the United States and China will launch a “Cold-War II.”

Bilateral or regional Free Trade Agreements that take place in APEC, like the TPPA, exert tremendous influence on smaller nations in all trade sectors, which include agriculture, environment, intellectual property (pharmaceuticals and GMOs), investment, labor, manufacturing, telecom, ecommerce, and textiles and apparel. Other less obvious sectors affected include services and government procurement, such as the purchasing and contracting of government or military goods and services.

How the TPPA benefits the investment and development partners in the United States, Hawaii, and among the various trade partners have yet to be fully realized as these negotiations are being held in secret. It should be noted, though, that the United States only ratifies one kind of trade agreement, and these are NAFTA-like, neo-liberal free trade/free-market agreements that place markets and access to markets above people and environments.

“The secrecy that shrouds the Trans-Pacific Partnership negotiations just got even more outrageous”, says professor Jane Kelsey, who monitors the negotiations. “The parties have apparently agreed that all documents except the final text will be kept secret for four years after the agreement comes into force or the negotiations collapse. This reverses the trend in many recent negotiations to release draft texts and related documents. The existence of agreement was only discovered through a cover note to the leaked text of the intellectual property chapter.”

The impact of these agreements often alienate peoples from their traditional livelihoods ...

Unfortunately, these arrangements are held together by legally binding investment agreements. The impact of these agreements often alienate peoples from their traditional livelihoods, often jeopardizing food and water security, housing, health, and other economic securities. As a result of labor disputes for example, corporations might insist that governments open their borders for cheaper labor from other countries. This liberalization of labor protections often destabilize populations and undermine any kind of long-term, meaningful equitable solutions that may actually benefit local workers and families. These arrangements reward consumption while strangling meaningful job creation. There are many alternative and viable economic strategies worth examining, yet entrenched free-market/free-trade advocates refuse to abandon their stakeholder shares.

One example of how this system exacts profits for its stakeholders is that transnational corporations franchise industries within regions the way fast food or mini-marts are franchised in neighborhoods. Countries are led to believe that they need to compete for investment with other countries in the region and governments are often willing to compromise long-term environmental security, or in some cases the traditional needs of its people.

For the International Investment Regime, franchising is like trawling. APEC throws a net in the ocean and drags their International Investment Agreements (IIA) behind them with the bait-incentives for infrastructure development and aid services. The government of Tonga might do what the government of Samoa does, what Fiji does, what Solomon Islands do, what PNG does and so on. They race into the trawl.

Appearing on ABC Radio Australia on June 30, U.S. Assistant Secretary of State Kurt Campbell announced that the United States would “work closely with the smaller Pacific Island nations to help combat the effects of climate change and to improve food security.” Campbell’s pronouncements were seen as a benefit as he outlined the use of the U.S. Agency for International Development (USAID) and the military to provide for development, infrastructure, and security strategies that promote and protect stakeholder investments required by the APEC investment regime.

As U.S. relationships with island nations appear to be growing stronger, emerging island economies may find themselves encumbered by new investment agreements that hinder people’s rights for stewardship of their land and resources. To be clear, these agreements will provide for economic advantages for the few over the many, and it will likely foment greater disparities within island communities.

The Trans-Pacific Partnership will be the largest free trade agreement in U.S. history.