HONOLULU—Perhaps it comes down to how you define wildlife trafficking. For Snorkel Bob, aka Robert Wintner, wildlife is trafficked every time a tropical fish collector ships a fish from Hawaii and the resulting damage to Hawaii’s reefs and their habitués is squarely on the backs of the aquarium trade. It’s a moral issue, he says, that is at the heart of conservation and why he is advocating for a total ban on the harvesting of aquarium fish for export, a move that could put the tropical fish trade out of business.

While the aquarium industry, the State, and scientists protest to the contrary, Wintner is pressing his case through a new book tour promoting, Some Fishes I Have Known: A Reef Rescue Odyssey. A second book, Every Fish Tells A Story, is scheduled for a late spring 2011 release and he is beginning work on a third in the series.

“What animals choose to show individuals is a reflection of what individuals show the animals,” Wintner says. “I didn’t even imagine it could happen with fish, but it does. I want to approach reef society.”

Wintner is the manufacturer of masks, fins, and snorkels and heads the Snorkel Bob Foundation, which he describes as an active member of Hawaii’s conservation community. Photographing fish and reef life over many years, he says the idea and purpose of the book are synergistic.

“After I got so many pictures, it was a question of what to do with them and I’ve been working on this aquarium issue for a number of years at the Legislature and at the county level on Maui,” Wintner says. “It just seemed like a great combination. A book of photographs was a great vehicle for the issue and the issue needed a vehicle.”

The substance of that issue is exactly what is contested between Wintner and the State Division Aquatic Resources (DAR) officials, other scientists, and the Hawaii Tropical Fish Association. Although Wintner agrees the degradation of Hawaii’s reefs and the decrease in fish population is partially attributable to pollution from injection wells and runoff, plus the over development of near shorelines and the introduction of the predator French Polynesian grouper commonly called Roi, he says his biggest problem is that the tropical fish collecting industry doesn’t see itself as part of the problem.

“The aquarium trade claims scapegoating because of these other causes and their [the trade’s] logical inference is that they should be okay to have carte blanche extraction because it’s not their fault,” Wintner says. “But if the reefs are in peril, and they are, you don’t take anything from them.”

The State and other scientists also believe the reefs are in danger. Dr. John Randall, emeritus Senior Ichthyologist at Bishop Museum and a world authority on coral reefs, says there is no question reef fish resources have been diminishing, but to assign the major cause to aquarium fish collectors is misleading.

“Actually, their impact is negligible compared to commercial and recreational fishing,” Randall says. “Particularly at fault for reef fishes is the use of gill nets. Hawaii is the only maritime state that has not banned gill nets. We should also ban spear fishing at night with scuba. Hawaii once had a law forbidding the sale of speared fish. Fisherman managed to have that repealed, but it should be reinstated.”

Wintner says that’s why Maui has banned the use of gill nets and hopes the rest of the state will follow suit.

Dr. Richard Pyle, who has worked in the Fish Collection at Bishop Museum since 1986, believes the aquarium industry is acting responsibly. “As a whole,” he says, “the Aquarium fish collectors in Hawaii exemplify the right way to manage a fishery.”

Wintner says he wants to know just what constitutes a fishery: “The Department of Land and Natural Resources was mandated in the mid 1950’s to manage fisheries, but does a fish have to die for it to be a fishery? I was told by the head of the DAR in Kona, yes it does, and it makes no difference to DAR if it dies right now as it does in a food fishery or in a year as it does in aquarium trade.”

Wintner is speaking of DAR’s Dr. Bill Walsh. At issue is the mortality rate of aquarium fish and when they die. Winter says many do not survive from the point of departure from Hawaii to acceptance of shipment by the retailer.

“Cumulative stress is what happens in shipment,“ Wintner explains, “and beginners [hobbyists] have higher mortality rates. With 1.5 million aquariums worldwide and mostly in the U.S., most [hobbyists] have to reorder fish.”

Although Randall and others have detailed the great longevity of certain aquarium fish in captivity, Wintner says keepers are only looking at those fish that do survive. He also admits some of this is “speculative stuff” in part based on the unreported catch guess attributed to former DAR Chief Dan Polhemus, who Wintner quotes in his book as saying that the actual catch is probably two to 10 times the number reported.

Wintner has taken heat for that, including from Polhemus. In an email to Hawaii Public Radio dated November 12, 2010, Polhemus states: “It did not appear to me, at that time or any time since, that the aquarium fishery had any particular acute pattern of under-reporting of catches. In fact, the sources who originally made such assertions, when pressed for details so we could potential pursue enforcement, subsequently retreated from their earlier broad claims. Because the State tracks both fisher catch reports and dealer sales reports, it becomes difficult for any fisher to maintain under-reporting for any significant periods of time because the discrepancies show up rather quickly between fish reported caught and fish reported sold.”

According to Wintner’s statistics, while over 100 species of fish are collected in Hawaii, seven species comprise 90 percent of the harvest. And first on his list is the yellow tang, now almost exclusively collected on Hawaii Island. “Kona is the hub of the aquarium trade in Hawaii,” Wintner says. “They’re taking yellow tangs with no limit and taking thousands of them a day.”

In an email dated November 4, 2010 from Walsh to Rene Umberger, one of Wintner’s supporters, Walsh states: “At this point in time, I believe it’s a fair statement that the aquarium fishery for yellow tangs in West Hawaii is unsustainable over the long run—without additional management measures. Here’s the reasoning. Yellow tangs comprise 81 percent of the West Hawaii fishery.”

A point of conciliation? Not as far as Wintner is concerned.

“Bill Walsh is a State employee and an ardent outspoken defender of aquarium trade,” Wintner says. “Up until now he has stonewalled this. He has promoted the idea that over the last eight years that yellow tangs are resurging.” Wintner accuses Walsh of spinning the data, suggesting that “maybe he was only following orders.” He also noted that Lingle administration policy director Linda Smith was formerly an aquarium trade wholesaler.

Going forward, Wintner says he will continue to advocate for a total ban on the harvesting of tropical fish for export and that Sen. Josh Green has a plan to give collectors a five-to-10 year transition period to find a new line of work. Meanwhile, collectors will not rest well knowing their livelihood is threatened and Wintner says that’s part of his point: This is not about livelihood.

“The DLNR took until late 1970s to ban the taking of corral and live rock,” Wintner explains. “It took 20 years to complete that prohibition.” And he says the State should want to protect one of the big reason visitors come to Hawaii.

“Reef based tourism is 400 times the [value of] aquarium trade.”

And as Hawaii’s ocean is the biggest aquarium there is and as Wintner’s business depends on tourists, does he see himself as a special interest?

“Yes I think I am a special interest,” Wintner says. “And I like to think that special interest is serving as the voice of the fish. I do not need to make more money. The end.”

I wouldn’t bet on it.

The full interview with Snorkel Bob is on the Town Square archive at www.hawaiipublicradio.org. And by the way, if you want to go out and capture a little friend from our waters, he agrees: “I think people in Hawaii should be allowed to go out and catch a fish and keep it as a pet—and maybe later let it go.” 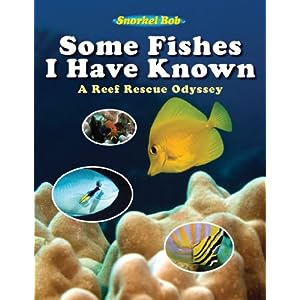