The Hooser Analysis
with Gary Hooser

How is it possible that a guy like Aiona can even be considered a credible Gubernatorial candidate?

He has absolutely no meaningful experience in government or the private sector.

As lieutenant governor, Aiona has totally squandered the past 8 years—accomplishing nothing of any significance whatsoever. Zilch. Kaimu. Nada. Zero. Walang anuman. ‘Ole. 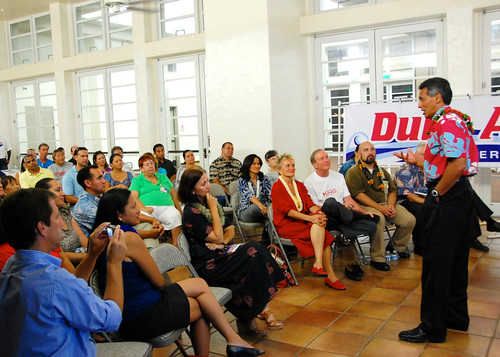 His main claim to fame is being appointed to a judgeship, which he then quit, claiming the pay was too low.

Plus, Aiona is a right wing religious zealot. He believes that everyone who does not agree with his particular theology is going to hell. At the present count that would be over 5 billion of us.

Which is why of course that Aiona and his friends would like to save us.

Are people so shallow, so busy, and so uninformed that they will vote for [Aiona] just because he’s young, he’s Hawaiian, and he’s pretty?

So how can it be possible that 48 percent of Hawaii residents are ready to elect him as Hawaii’s next Governor? Are people so shallow, so busy, and so uninformed that they will vote for him just because he’s young, he’s Hawaiian, and he’s pretty? Is it the religious dogma and Tea Party frenzy of the “new right” that drive his numbers? Has our democracy become so broken and so driven by money, marketing, and media that substance matters not at all?

It is on days like this that I wonder. I wonder about the wisdom of our forefathers. I wonder if perhaps our system is broken and in need of radical, perhaps revolutionary, change. I wonder why more people are not as outraged as I am, but rather seem content to muck about their lives, accepting and believing that none of this matters anyway.

But then I come to my senses and with some relief realize that this poll does not include the neighbor islands nor rural Oahu, and is only of residents of the First Congressional District—the same district that gives us other right wing conservatives like State Sen. Sam Slom and Rep. Gene Ward and the same district that has elected and re-elected Congressman Neil Abercrombie for the past 20 years. Go figure.

Gary Hooser is the former State Senate Majority Leader and has represented Kauai and Niihau since 2002. Hooser recently ran for the office of Lieutenant Governor in Hawaii’s 2010 Democratic Party primary election.

The Hawaii Independent would like to hear and publish your views on Hawaii’s governor’s race, and other political races, going into November’s General Election. Email your opinions to [email protected]

Read the column “Comment: Hawaii voters have to understand what comes with an Abercrombie economy” by Steve Jackson here.