LAIE—Most of us do little things in life to try to make the world a better place. We recycle. We toss our loose change into Salvation Army buckets during the holidays. Some of us may even volunteer for a community group or senior center. But there those among us who do all of those things, and still make the time and find the energy to do something personally extraordinary to better the lives of others. One such person is Heather Howells of Laie.

A wife, a mother of a teenager, and a nurse who brings new life into the world at a busy Oahu hospital, Howells is about to embark on a personal journey that will take her a world away to the forbidding Kalahari Desert in southern Africa. Over seven days, Howells will run 155 miles across the Kalahari, with only what she can carry for nutrition and protection from the relentless and unforgiving wilderness (three liters of water are provided to runners each day, with a crude, two-sided tent and a group fire). The run happens from October 17 to 23. 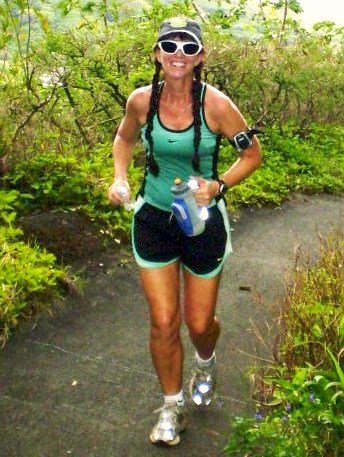 She’s doing it to help a HOKISA, a small orphanage in South Africa that cares for pediatric HIV/AIDS patients for children who lost their parents to the disease. She will be the first runner in the event’s 11 years to run under the Hawaii flag.

“If everyone could do one thing to help people and the planet,” Howells says, “this would be an awesome place.” She says it as though she’s puzzled that everyone doesn’t realize this simple truth.

Howells is running in the 11th Kalahari Augrabies Extreme Marathon to raise money for the orphanage, with which she became familiar while living in South Africa. She is raising money through Back a Buddy, a South African organization that allows people to donate money for causes on behalf of people like Howells, who take on enormous physical and mental challenges to help others.

“I absolutely love those kids,” she beams.

But there is a long way to go between “I’m going to do it” and “I did it.” Howells has been running seriously for only five years. She’s run in three Honolulu Marathons, and done ultra marathons on Maui and Hawaii Island. She now trains between one and seven hours every day to prepare herself for the colossal run ahead of her. And to hear her tell it, the physical challenge is the easy part.

(At this point in the interview, her husband Steve chimes in to say “You’ve got to be mental to do this.”)

Even over a casual dinner, Heather Howells’ resolve to finish this race and support the children she’s come to know is obvious. She plans to visit with the kids once she finishes the race. “I want to inspire them and show them that anything is possible. One of the boys wants to come to Hawaii to surf, and somehow, I know he will.”

Anyone interested in supporting Heather Howells and her bid to finish the Kalahari Augrabies Extreme Marathon can visit www.backabuddy.co.za/kalahari-for-hokisa.

Live updates of runners in the ultra marathon are available at www.extrememarathons.com/augrabies.