WAIANAE—Parents, faculty, and children of Kamaile Academy berated board members for the recent firing of Glenn Kila and Clarence DeLude—the school’s chief executive officer and principal, respectively—at a late afternoon meeting in the school’s cafeteria earlier this week. Some demanded answers, others condemned the board’s motives, and many insisted on the reinstatement of the two administrators.

Kamaile Academy is a charter school in Waianae that is overseen by the Ho’okako’o Corporation, a private non-profit organization established in 2002 to improve the quality of education offered to Hawaii’s children through conversion charter schools.

One of the first issues brought up at the meeting on Tuesday, November 16 was the one-sidedness of the recent communication with the public: While the board of Ho‘okako‘o Corporation has interacted with the press and posted several communiqués on its website, Kila and DeLude have been silent on the matter since their termination on November 3 .

“Where are Kila and DeLude?” said George Williams, a retired university professor and volunteer with the academy, who said it seems they are under a gag order.

Board vice-chairwoman Pauline Lo Bailey responded by saying the two had signed a contract that prevented them from speaking out.

“It was an agreement between us and them,” she said.

But the forced silence from the two administrators the previous weeks only heightened the community’s demands for greater transparency, particularly because the board’s decision came without any warning. Kila and DeLude also both resigned last Wednesday instead of taking up the board’s offer to serve until December 15. 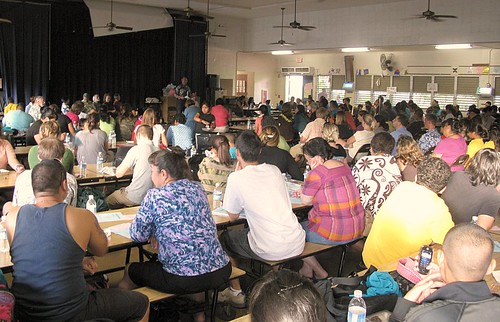 “We want to know the truth,” said many in the audience.

The board didn’t address many specifics regarding the firing, but, according to a Ho‘okako‘o press release, Kila and DeLude’s immediate dismissal was a result of them being “reluctant to pursue SIG [School Improvement Grants] funding [worth up to $3.5 million] for the school because the transformation model requires a change in school leadership.”

SIG funds are available to Title I institutions, which are schools whose students come from predominantly low-income households.

Ho‘okako‘o is also applying for Race to the Top (RTTT) funds, which have specially allotted monies for schools performing in the bottom five percent. Similarly to SIG stipulations, under RTTT’s “Transformation Model,” the model of choice for the Ho‘okako‘o, the principal is also replaced (other models are “Closure,” “New Governance,” and “Staff Replacement”).

Lo Bailey said Kila had challenged the relevance of the Hawaii State Assessment (HSA) scores that placed Kamaile in the bottom five percent of testing performance statewide. Kila had said that, against certain factors, Kamaile was improving at a strong rate.

“But based on national and state standards, it’s still the bottom five percent,” Lo Bailey said.

Kamaile’s CEO was not alone in his assertion that the school was improving, however.

Calveena “Pua” Gomes, who is both an educator and a parent of sons who attend Kamaile Academy, agreed with Kila and said that scores have increased from previous years. And the test results don’t take into account the challenges the school is overcoming in order to help its students perform better, she explained.

“We’re working with struggling families,” Gomes said, who notes that beach sweeps make it hard for the kids to concentrate, and that a lot of Micronesians have to take these tests knowing hardly any English.

Gomes credits Kila and DeLude with a number of innovative measures, from creating optional Saturday classes, to creating a school store where affordable food, clothing, and hygienic products are available, to implementing a free bus service that picks up the houseless kids first on the way to school and drops them off last on the trip home so they wouldn’t feel embarrassed.

”[Kila and DeLude] taught us how to look at the problem, listen, and solve the problem.”

And that is the problem with RTTT funds, said Charla Wilcox, a teacher at Waianae High School who has a son in the sixth grade at Kamaile Academy.

“We [teachers] wish the State would give back the $75 million for Race to the Top funds,” Wilcox said, explaining that longer school days and more teacher training isn’t going to solve the problem. She suggested putting that money into the communities to provide more stability and meet the children’s basic needs.

Testimonies throughout the night were in strong support of the two ousted leaders.

“I don’t believe any of you has the dedication like Kila does,” one man said to the board members.

One woman said Kila and DeLude embraced her autistic son after Kamehameha Schools said he wasn’t a good fit for their program. He’s no longer in special education in math and he’s become a lot more social with his peers, she explained.

“I don’t know what to tell my son,” she said. “He cannot focus. He shuts down when things change.”

A stack of letters written by students was also given to the board.

In response, the transition team vowed to do “the best it could” during the interim before the board hires the permanent replacements. 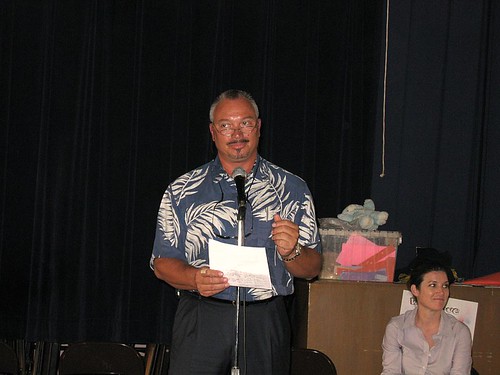 “I know I can’t be Glen,” said Kathy Kamo, the now acting principal. “I thought long and hard about this … but I want to be here so he [Kila] can go on to his next level of leadership.”

Kamo also noted that Kila and DeLude would still be involved with Kamaile Academy. “This is about building a bridge, it’s not about divisiveness,” she said.

“And we want to collaborate on the decision-making processes,” McCorristan said. “We are going to be planning for the 10th grade.” Kamaile Academy currently educates students up to the eighth grade, but the community has been pushing to increase the available grade levels.

“This isn’t about cutting off the po‘o’s [principal] head,” Lo Bailey said. “His role may become something different. We will help him and he will help us find a way.”

These reassurances weren’t enough for many in the audience, who asked what could be done to restore Kila and DeLude to their positions.

“How many signatures do I need to get these gentlemen back to this school?” one woman said.

“The decision is made,” responded board chairman Keith Vieira, who acknowledged the deep emotions felt by the community. “First the transitional team and then the new leaders [must be selected].”

Robert Oliveira Jr., a Hawaiian National, inquired about de-chartering while also accusing the board of acting illegally, stating that a local school board should have made the decision.

Kathy Kamo defended Ho‘okako‘o Corporation’s procedure, stating that the board has the powers akin to the State Department of Education (DOE). She then explained that de-chartering required a minimum 50 percent vote by the various stakeholders connected to the school. If that process were successful, the school would revert back to the DOE.

“You’ve violated those processes ...” Oliveira said to the board members. “You’re fired.”

The Hawaii Independent will be closely following developments at Kamaile Academy. This is the first part in a series by Samson Kaala Reiny.